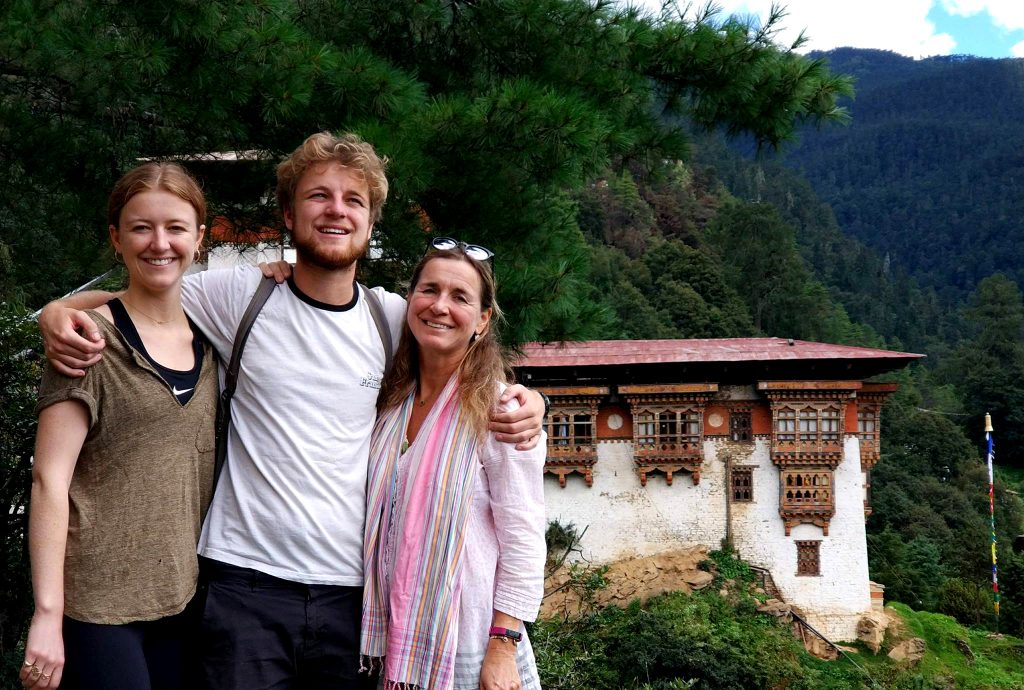 Our eight day visit to Bhutan was quite simply one of the most magical and intriguing experiences of my life. Travelling from New York City with my 24 year old daughter to visit her 22 year old brother who is studying in Thimphu for four months, our trip was swiftly and efficiently arranged by Breathe Bhutan in less than a week.

The approach to Paro airport is said to be one of the most alarming in the world and it certainly lives up to that reputation as the plane glides through dramatic mountains, its wing tips appearing to come close to scraping the scattered houses and farms on either side. Leaving the plane, the soaring mountains and striking architecture left little doubt where we were.
We were met by our guide Dawa and Jack, both resplendent in their ghos – the national dress that most men wear everyday. Our driver Wunde drove the small minibus steadily away from the airport along the road to Thimphu, effortlessly dodging cows and dogs in his path as well as gently swerving to avoid oncoming vehicles that constantly seemed to find themselves on our side of the winding road.

From our room in the hotel in Thimphu we looked straight onto the striking white and gilded National Memorial Chorten, with peaceful worshippers circling clockwise at all hours of the day and a backdrop of steep mountains behind. Dawa took us to buy kiras – the national dress for women – a very pretty and comfortable checked wrap-around folded skirt with a plain bright jacket which we needed for visiting the many fortresses and monasteries in the coming days.

Bhutan is steeped in Buddhist mythology and history and this forms the basis for touring in the country. We spent a couple of days in Thimphu, visiting the new Golden Buddha that sits high on a mountain overlooking the city, exploring the majestic Thimphu Dzong which is still used by the government and eating some delicious food. We climbed for an hour to visit the majestic Tango Monastery; visited the clean and colourful local fruit and vegetable markets; went to the local art centre and the impressive textile museum; and spent a lively and fun evening listening to an excellent local band at Mojo Park, the leading nightspot in the city, owned by Kinley.

Then we set off for Punakha, a three hour drive, with Wunde navigating the breathtaking but at times alarming road east, up over mountain passes, high above rivers churning below. At 10,000 feet, the top of Dochula pass, the 108 memorial chortens are an impressive sight, shrouded in the tops of the clouds hanging in the valleys below. We had lunch in Punakha, looking down over peaceful vivid green rice paddy fields to the Chimi Lhakhang, built by the Divine Madman, one of the most popular of Buddhist figures and inspiration behind the phallus’ symbolising fertility and protection that decorate many houses. We walked down into our view and visited the temple in the heat of the day before driving on through the beautiful valley to Punakha Dzong. This is the most important fortress in the country and the place where the Kings are crowned. It sits in the fork of two (male and female) rivers, an imposing building with 21 temples and several courtyards and halls, as well as a high central tower. We reached it after crossing a high narrow suspension bridge which tested any fear of heights that we might have.

Our hotel that night had dramatic views of the Dzong and mountains, accentuated by the mighty thunder and lightning storm which swept through in the early evening, sending the hotel into darkness.

The drive the next day to Phobjikha Valley was through even more staggering mountain scenery. The tarmac had long disappeared, even though this is the main road through the country and at times it seemed impossible that we would not career down the mountain into the river thousands of feet below. But Wandee’s steady hand avoided all the hazards, including speeding trucks, motorbikes and rockfalls. A thin mist hung over the road and most cars and trucks were brightly decorated as it was a special day honouring the god who looks after vehicles. We stopped for a blessing and a quick snack provided by the workers who are building the road but are only permitted to work at night. After narrow and steep switchbacks we eventually reached the Lawa pass, with hundreds of prayer flags fluttering in the rain and descended an unexpectedly gentle road into the valley below.

Phobjikha Valley is the migratory home of the black-necked crane, who arrive towards the end of October. Its flat bottom is mainly wetlands, with a few rice farms scattered around. We had lunch and visited Gangtey Gompta, where there we seemed to be the only visitors. That night we stayed in a farmhouse, where the welcome was rustic but very warm and the food delicious. We ventured out for a walk around the village before supper where people regarded us with amusement and friendly smiles.
We set off back west the following day, stopping on the pass to hang our own prayer flags that Dawa had suggested we buy and have blessed in Gangtey. Then we descended into Wangdue before climbing up again, navigating a narrow rollercoaster road which ended in a very remote village – the village that Kinley comes from and where Wandee lives with his wife and beautiful two year old daughter. The rain had cleared and we could see the beauty of the valley laid out below, with the brightness of the green rice fields vivid against the darkness of the forested mountains the other side of the steep valley. Wandee’s family welcomed us warmly and we had a delicious lunch in their house, sitting cross legged on the floor. Later Kinley’s nephew showed us proudly around the village and we met his mother who was very spry for 84. The country has a real problem with young people leaving the farms to go and seek work in the city and the remoteness of the village illustrated this well – most people were much older and the nephew explained that he worried that quite soon there would not be enough people to do the harvesting and farming.

That night we stayed back near Punakha in an excellent hotel overlooking the Divine Madman’s temple and Dawa took us out to experience the night life.

Back in Thimphu for the afternoon, we did some shopping for souvenir, before driving to Paro, where we were staying for the last couple of nights. That night we had dinner with a friend of Jack’s who he had met hitch-hiking. His wife cooked amazing momo dumplings – Imo and I had a go at making them, but were pretty unsuccessful. His three small boys bounced happily around the room, climbing all over Jack, while we discussed Bhutan and its way of life and culture and how it is making its way tentatively into the 21st century occupied by the rest of the world.

Dawa had saved the best until last and we were up early on our final day to climb up to Taktsang – the Tiger’s Nest. It was drizzling as we set off, but we kept getting tantalising glimpses through the clouds as we climbed up the vertiginous path. It is a long breath-sapping hike, but the views on the way are astounding and the destination one of the most extraordinary places on earth. Perched high on a narrow ridge, it defies imagination as to how anyone could ever get up there in the first place, let alone build such an imposing and majestic monastery. The path takes you to within what appears to be touching distance – and then you descend hundreds of steps down into the valley to a waterfall swooping from an unseen peak before climbing back up to the monastery. Inside an overwhelming smell of incense and crowds of pilgrims remind you that this is one of the most sacred places in Bhutan. The multi coloured paintings and gilded statues seem to be the brightest and most intricate so far but the best bit was climbing down a rickety ladder into a narrow crack in the rock where the Guru Rinpoche was said to have meditated after landing there on his flying tiger.
There just remained the pretty town of Paro and its majestic Dzong next to the river to explore and then it was time to leave the Land of the Thunder Dragon. Bhutan really is out of this world – literally and metaphorically – and the pressures of the outside world do seem to be crowding in, thanks to the internet and mobile phones. But the importance of Gross National Happiness – as important to the King and government as Gross National Product – will hopefully ensure that this tiny unique country can hold on to its traditional values and culture which are reflected in its people, who are gentle and extremely hospitable.

What our guests have to say about their experience of Bhutan

The last 7 days have been nothing but magical and memorable.  We came expecting nothing but enjoying nature and...

We hosted the amazing travel family Bucket List Family in Bhutan and we explored Bhutan from the 17th October – 25th...

Jessica Nabongo is on a quest to be the first documented black woman to travel all countries in the...

In all of my world travels I get to see many cool places, but one of the most special...

Rachel Rudwall explored Bhutan from 12th – 18th November 2017 with Breathe Bhutan and here are some videos she...

My wife and I wanted something different from a typical Bhutan tour, and Kinley went out off his way...

I travel professionally, I spend at least two thirds of my year a guest in someone else’s country. I...

I can honestly and seriously say Bhutan is the most beautiful place on earth. Itinerary included 5 busy days...

It really was a pleasure and a gift to be there and explore your amazing country, the stunning and...

Bhutan may be the only country which is untouched by global interference and people in rural Bhutan still continue...

Breathe Bhutan in partnership with Radio Valley 99.9, a fm radio station in Bhutan organized a charity concert by...

Traveling with Breathe Bhutan was a fantastic experience in an absolutely magical country. Our guide and driver were so...

Visiting Bhutan, has been a highlight in my travel journeys. It was such a relief to discover that Bhutan...

Lori Schwanbeck is a Meditation and Mindfulness Teacher and she first traveled Bhutan with us in October 2017 and...