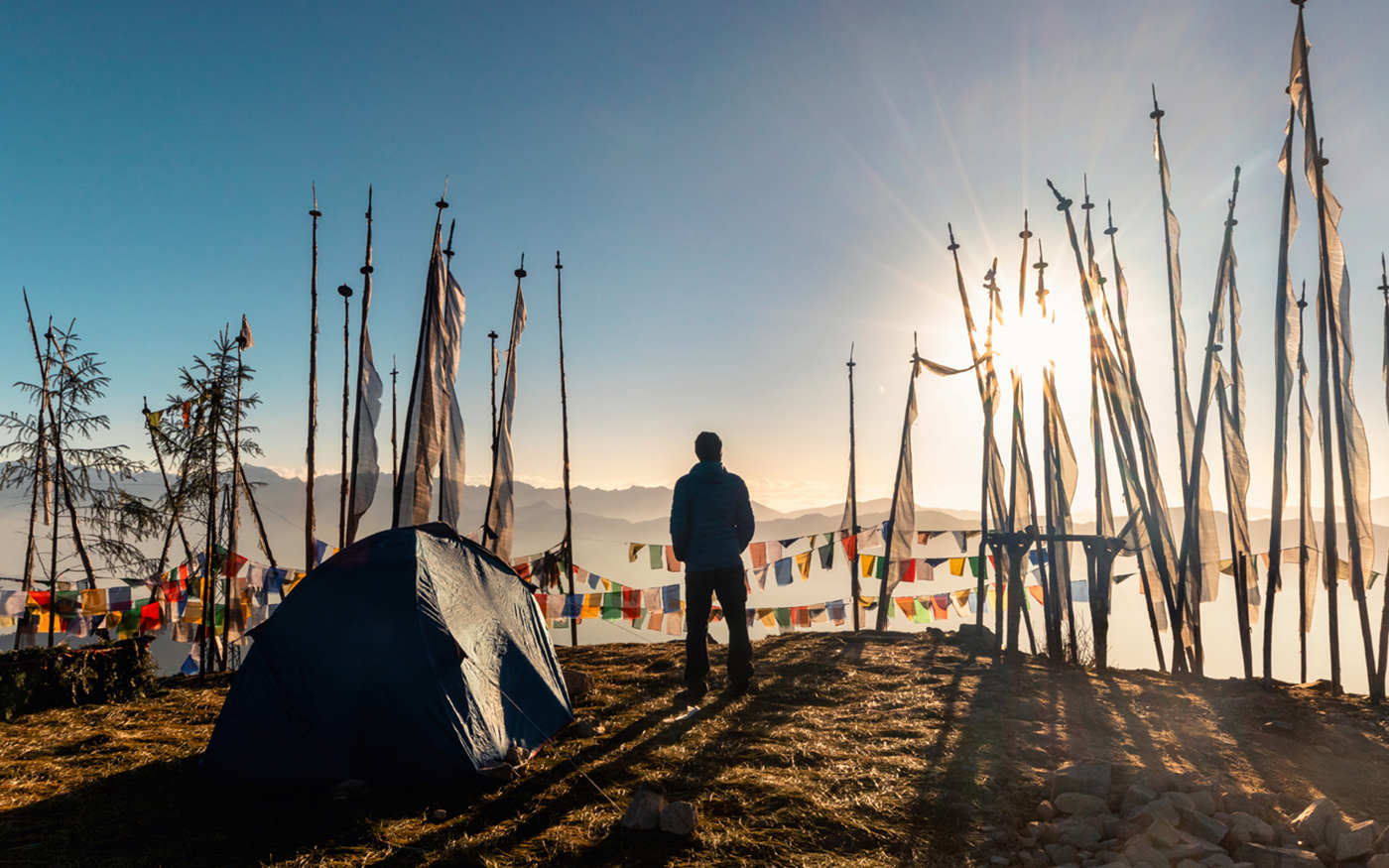 The Wild Rodung La Trek route was once an important trade route but now it is only used as a hiking trail. The trail passes through alpine and bamboo forests, meadows and mountain passes, through villages and temples offering hikers an incredible array of biodiversity to appreciate. The Hike typically takes 10 days to complete and is best carried out in winter between October-Early November or in spring between April-Early May.

While the Rodung La Trek does not ascend to very high altitudes, it is still fairly challenging as the trail covers some fairly steep climbs and descents. The trail takes you from Bumthang in Central Bhutan to Trashiyangtse in the far eastern reaches of the kingdom.

One day 1, the trail takes you around Chamkhar Chhu, a river rich in trout. After passing Thangbi Lhakhang, a temple built by the first Karma Shamar in 13th century you will enter Ngang Yul or ‘Swan Land” named for the swans that were once common in this part of the valley. Near the center of this area you will find Ngang Lhakhang, the “Swan Temple”. The Ngang Lhakhang was erected by the Lama Namkha Samdrup in the spot where his arrow landed. The design of the lhakhang inspired by a vision he had.

Today, you will begin with a gradual climb to Phephe La pass (3,353m). Follow the trail until the pass takes you through a picturesque forested region. It is recommended that you allow for stops along the way to enjoy the natural beauty of the surroundings. You will stop for the night at Ogyen Choling Manor. This manor houses one of the most interesting museums of Bhutan and visitors will gain a better understanding of the lives of the landed gentry in traditional Bhutanese society.

Today’s walk is through bamboos, hemlock and finally up to an alpine forest. The camp is in a meadow at the head of the valley.

Rodung La (4,160m) is about three hours climb from the camp. From the pass you then continue downhill through a gorge, overlooking scenic mountain valleys covered in lush pine forests. The region is rich in folk lore concerning spirits and yetis. Near the camp you can see a ruined stone building that once acted as a grain storehouse during the reigns of the first and second king.

This trail winds through the villages of Ungaar, Bulay, Kulaypang and Gomda before bringing you to Drula village and Khaine Lhakhang. One of the oldest temples in the country, it was built in the mid 7th century by the King Songtshen Gampo of Tibet to subdue demons.

From your camp, the trail goes down to a stream and back up to a basic health unit and a community school in Gorsam. Further on, you pass a Tibetan-style Umling Mani, built by a lama from Tibet, and a chorten on Zerim La (1,940m). Before reaching the next pass, Tage La (1,760m) you will see Menjabi, a beautiful Bhutanese village with large white houses. The campsite for the night is located South-east of Tage La near Tangmachu High School. Another possibility is to organize transport and drive to Lhuentse, the capital of Lhuentse district. Lhuntese Dzong is considered to be one of the most impressive dzongs in Bhutan.

After arriving at Kuri Zampa the trek begins to gradually climb up through paddy fields and villages before bringing you to Chusa.

Today’s trail will have you continue uphill through thick forests overlooking spectacular mountains. The camp is located in a forested area at an altitude of 2,400m.

Today you will do the longest hike day of the trek. It is a gradual descent to Trashi Yangtse. As you descend the chirpine and hardwood forests are slowly replaced by oak trees. The final camp of the trek is located in a subtropical forested region.

The following equipment are provided