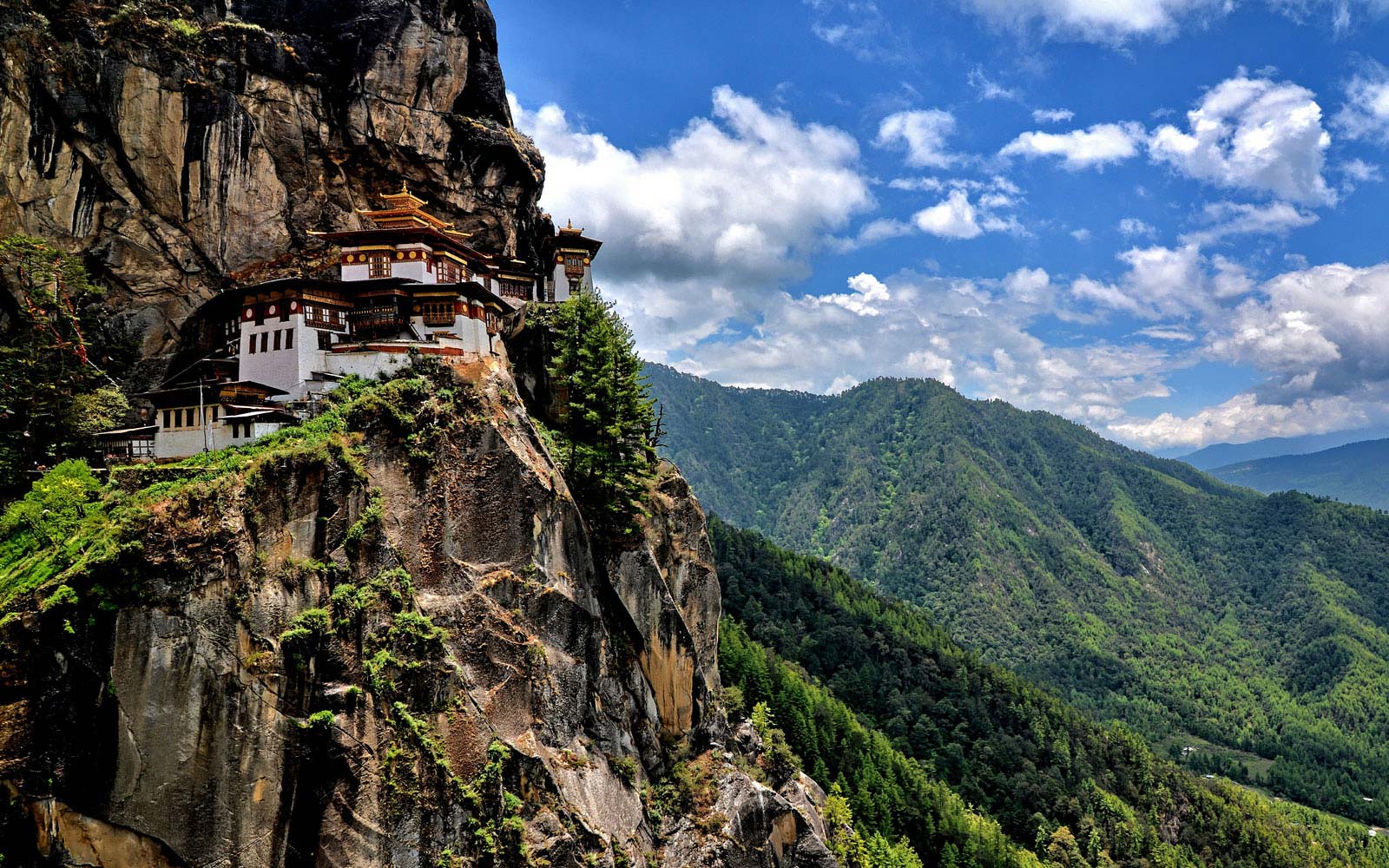 Taktsang translates to The Tiger’s Nest. The monastery is situated 900 meters above the Paro valley precariously perched on a cliff. It has an equally fascinating history. According to the legend, Guru Rinpoche flew to the current site of the monastery riding atop a tigress and meditated in a cave for 3 years 3 months and 3 days to subdue an evil force and bless the land. The monastery was subsequently constructed at the site in 1692. Guru Rinpoche is a Buddhist saint who according to history introduced Buddhism in Bhutan.

About 20 minutes’ drive from the town, tourists will arrive at the base of the monastery and continue an uphill climb on foot. The Tiger’s Nest is the most visited tourist attraction in Bhutan and owing to its history; it is also one of the most sacred religious site in the country. The wide dirt trail takes hikers through the pine forest.  As the hike reach its summit, tourists can take in the spectacular panoramic view of the valley below and a close up view of the monastery above seemingly floating in the sky.

(Taktshang or the Tiger’s Nest Monastery is truly one of the most incredible sites as well as the most venerated places of pilgrimage in the Himalayan Buddhist world. The monastery clings to the side of a precipitous rock face at 2,950 meters above the sea level. For the average hiker it takes about 2 hours to get to the monastery. Getting there does involve a bit of an effort, but it truly is worth every bead of sweat.

The Monastery derived its name from the story of its foundation. Legend has it that sometime in 747 AD, Guru Padmasambhava flew to the cave astride a tigress in his wrathful manifestation of Guru Dorji Drolo in order to subdue evil spirits in the locality and preserve the integrity of the Buddhist teachings, which is why the cave came to be known as ‘Taktshang’ or the ‘Tiger’s Lair.’ It is also maintained that it was his consort, Tashi Khyden (daughter of Sendha Gyelp whose health Guru helped restore in return for which Tashi Khyden was offered as consort) who transformed into the tigress and flew to the spot from Sengye Dzong in Kurtoe. There at the cave, the Guru is said to have meditated for three years, three months, three weeks, three days and three hours. A Temple complex was first built at that spot in 1692. Today, Paro Taktsang is the best known of the thirteen ‘Tiger’s Lairs’ in which the Guru meditated. The cliff on which Taktshang stands is also supposed to resemble a ritual dagger known as Phurpa. Many Buddhist masters also spent time here in meditation, the foremost being Langchen Pelgi Sengye, one of the twenty five disciples of Guru Rinpoche. The site was later visited and blessed by many other prominent Buddhist saints and masters as well, including the likes of Milarepa, Thangthong Gyalpo, Phajo Dugom Zhigpo and Zhabdrung Ngawang Namgyal.

Guru Rinpoche or Padmasambhava was a great saint and mystic from the Swat valley in modern day Pakistan who visited Bhutan and Tibet in the 8th century, tamed the hostile and negative forces and reintroduced Buddhism in these regions, broadly referred to as the second propagation of the faith. He is worshipped popularly in Bhutan and the Himalayan regions as the Second Buddha and regarded with the utmost reverence. The most important festivals celebrated in Bhutan – the Tshechus, are held to commemorate his birth and celebrate his magnificent deeds.

***Note: The total duration of the hike depends on your ability to walk. You can opt for renting a pony if you are not too confident about the uphill climb. (The fee for the hiring of ponies are not included in the package))

Crossing the Chele La Pass at an elevation of 3, 988 meters above sea level (from where we get to enjoy excellent views of Mount.

At Tachog Lhakhang you will be crossing a six hundred year old bridge built by the renowned iron bridge builder Drubthob (or the Realized and Accomplished One) Thangtong Gyelpo, a fourteenth century saint who built over fifty eight iron bridges throughout Tibet and Bhutan, mainly with the intent of helping pilgrims get to holy places.

Haa, one of the most beautiful valleys in Bhutan, was only opened to tourists as late as 2001. The sacred worth of the valley is complemented by the two sacred temples – Lhakhang Karpo and the Lhakhang Nagpo.

Gangtey is one of the most beautiful destinations in Bhutan. It is a wide glacial valley with a central stream meandering through the open grassland and thickets of dwarf bamboo.

Tashichho Dzong has been the seat of the government since 1952 and presently houses the throne room and offices of the King, the Secretariat and the Ministries of Home Affairs and Finance. Other government departments are housed in buildings nearby.

The bazaar was initiated in 2011 to provide Bhutanese artisans a platform to display and sell their products. It showcases a wide range of authentic made-in-Bhutan arts and craft products.

Weaving is an integral component of the culture and tradition of Bhutan. With the aim to preserve and promote this living art, the Royal Textile Academy of Bhutan was instituted in May 2005 under the patronage of Her Majesty Gyalyum (Queen Mother) Sangay Choden Wangchuck as a non-government, non-profit organization.

We Bhutanese treasure our traditional art forms and deem it crucial to preserve them as part of our cultural and religious heritage. It is what gives us our unique identity.

The Takin, which the locals refer to as ‘Drong Gyemtsi’ is the National Animal of Bhutan. It has the face of a goat and the body of a cow. The unique looking animal is associated with Drukpa Kunley, a fifteenth century saint, commonly referred to by Westerners as the ‘Divine Madman,’ and sometimes even as ‘The Original Gangsta of Tantra’ due to his unorthodox ways of teaching.

Crossing a small cantilever bridge over the Wang Chhu it is a steady climb up hill. People maintain that Zhabdrung spent upto three years in retreat at Cheri.

This nice offbeat hike will take about two hours, depending on your stamina. There is a well-laid path and the climb isn’t very steep as well. The pathway to the monastery is lined with pine and rhododendron trees, colorful prayer-flags, cute resting spots, prayer wheels, Chortens and meditation huts.

There are very few things in life that are as satisfactory as a hot stone bath to help you unwind after a long day.

Built sometime in the seventh century by the Tibetan Buddhist King SongstenGyempo, KyichuLhakhang is one of the oldest temples in Bhutan and is of prime interest for art connoisseurs, historians, pilgrims and visitors alike.

Originally, the Dzong was referred to as ‘Rinche Pung Dzong,’ or ‘Rinpung Dzong,’ which translates as ‘Fortress on a Heap of Jewels.’ Over time it came to be known as Paro Dzong.

Though it originally used to be called Jakar Yugyal Dzong, over time, it has come to be known as Jakar Dzong, which translates as ‘White Bird Dzong,’ and owes its origins to the legend of how a white bird dramatically perched on that very spot where the Dzong was built and how it came to be interpreted as a good omen.

The micro-brewery as well as the Swiss Farm was started in 1996 Fritz Maurer, a Swiss national who got married to a Bhutanese and went on to set up a brewery, and a Swiss Farm.

Jampey Lhakhang is said to be one of the 108 temples built by the Tibetan King Songsten Gampo in 659 AD. This temple is believed to have been built in a single day in order to pin down a giant female ogress obstructing the spread of Buddhism.

The museum was established with artifacts found in the manor that had been handed down from generation to generation through the ages.

It is one of the most important sites related to Pema Lingpa the renowned Terton (Treasure Discoverer) who is attributed to have founded the monastery.

Though the valley of Tang is the most remote of Bumthang’s valleys, the Arcadian scenes are truly picture perfect. It is the most off-the-beaten track destinations around Bumthang, and is known for its sheep and buckwheat.

Perched on a small hillock that rises from the valley floor, Gangtey Monastery is a very important monastery of the Nyingmapa school of Buddhism – the main seat of the Pema Lingpa tradition.

The village of Gaselo is an ideal location for day excursions and picnics. The region is primarily agrarian and the entire landscape is characterized by the most beautiful rice fields.

Adjacent to the 108 Chortens is a memorial in honor of His Majesty the Fourth Druk Gyalpo, Jigme Singye Wangchuck and in commemoration of the hundred years of monarchy in Bhutan.

Mojo Park is a live music venue and is a very popular weekend hangout for locals and travelers. You will get to try out local brews and interact with locals.

While on this trek, besides the scenic beauty of Himalayan ranges you will be visiting the two most revered Buddhist pilgrimage sites in Bhutan, Bumdra and Taktshang Monastery. Bumdra means ‘Rock of One Hundred Thousand Foot Prints’. The legends say that a hundred thousand Dakinis (angels) descended here and left their footprints on the rock […]

Located in South West of Paro and covering an area of roughly 1706 sq. km, Haa is one of the smallest Dzongkhag in the country. This tiny region is one of the most beautiful and isolated areas in the kingdom, adorned with pristine alpine forests and tranquil mountain peaks.  Haa is the ancestral home of […]

The king of Bumthang region in the 8th century fell terribly ill after falling out with the local guardian deity. Desperate to recover from the curse, he invited Guru Rinpoche to Bumthang to help the King regain his health.

The memorial chorten in Thimphu was built in the honor of the Third King of Bhutan. The Tibetan style white washed stupa is crowned with a golden crescent moon and the sun.

The 51 meter statue of Buddha Shakyamuni sits atop a hill overlooking the Thimphu valley. Buddha Dordenma statue is one of the most prominent landmarks of Thimphu city.