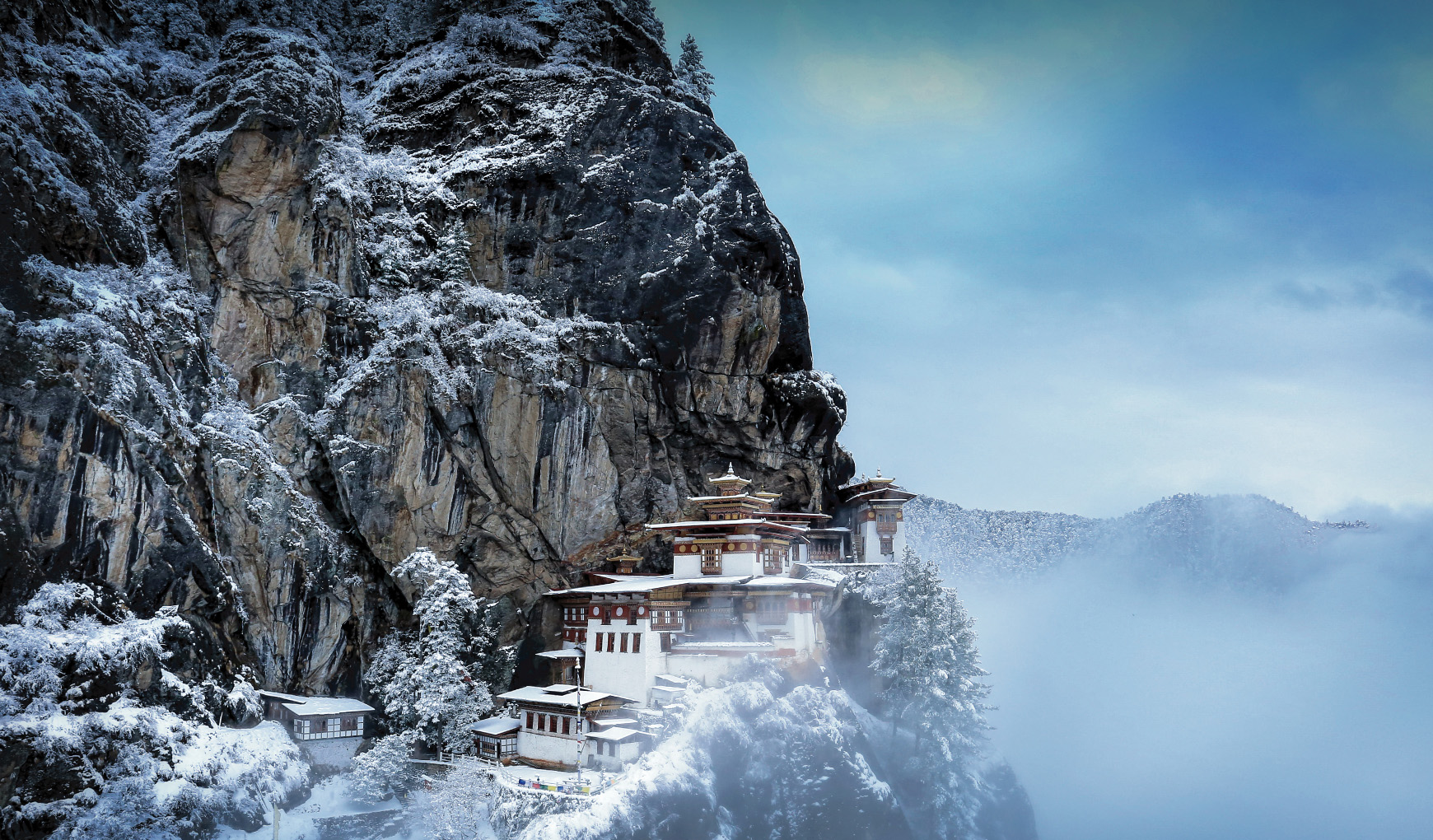 Bhutan: Happiness is a Place

You cannot find a more enlightening travel destination today. Perched high on the mighty Himalayan range, the kingdom of Bhutan has defied globalization and chosen to remain a hidden paradise, accessible only to few.

An Abode Of Gods?

Bhutan is the last bastion of Vajrayana Buddhism, a spiritual practice that is known to be one of the most profound schools of teaching in the Buddhist world. The sacred monasteries that sit precariously on sheer cliffs, the fluttering prayer flags that line the high ridges, the red-robed monks who chant through the day and night, give the kingdom an aura that comes from another time.

The people of Bhutan have drawn a rich culture from this heritage and made it the essence of our unique identity. Bhutan has decided that man can only survive, and truly live, by being in touch with the past. The onslaught of globalization is balanced with the values that have kept human society together through the ages. It is no surprise that the main goal in life for Bhutanese people is happiness. Even the mandate of modern Bhutan is Gross National Happiness. In translation, this means that economic development, a goal for much of humanity, is only a means to the real goal of happiness.

The kingdom of Bhutan, today, may be man’s last unventured destination. That is how the Bhutanese people would like to keep it. Thus, the carefully controlled tourism policy of the government that says, in essence: take nothing but pictures, leave nothing but footsteps.

You will not find a more enlightening travel destination today. Perched high on the mighty Himalayan range, the kingdom of Bhutan has defied globalization and chosen to remain a hidden paradise, accessible only to few.

The Land of the Thunder Dragon is marked by raw natural beauty, where the dense foliage changes dramatically as the sub tropical jungles at sea level merge into a fertile temperate zone and rise up to the great northern glaciers. This pristine environment is home to exotic wildlife and is a last refuge for endangered species like the Black-Necked Crane, the Blue Sheep, the Golden Langur, the White-bellied Heron and even the Royal Bengal Tiger.

We pride ourselves on a sustainable approach to tourism in line with the philosophy of Gross National Happiness. Firstly, to bust a myth: there is no limit to tourist visas. Starting 20th of June 2022, Bhutan has become a lot more expensive with the government revising sustainable development fee from US65$ to US200$ per person per night. Other expenses has to be covered on top of the SDF of US200$. The famous minimum tariff of US$250 per day, during Spring and Autumn and US$200 per day, during Winter and Summer, is no longer valid. You don’t have to travel in a large group and you can arrange your own itinerary. What you won’t find, is backpacker-style travel.

This is a country where the rice is red and where chillies aren’t just a seasoning but the main ingredient. It’s also a deeply Buddhist land, where monasteries are part of the mainstream, and where giant protective penises are painted beside the entrance to many houses. While it visibly maintains its Buddhist traditions, Bhutan is not a museum. You will find the Bhutanese well educated, fun loving and vibrant.

Buddhism and Hinduism are both practiced although the majority of people are Buddhists. There are more than 10,000 stupas or chortens and more than 2,000 monasteries in the kingdom, many built centuries ago in honor of the teachings of Buddhism. Some are national treasures like the Taktsang, the Tiger’s Nest built on a sheer craggy cliff face as if grounded on the deep faith of its people. Bhutan is a scared land with deeply spiritual people.

The hermitages that are built high above some of these sacred sites are a marvel to see; many of them are huts in traditional architecture, providing shelter to meditation practitioners amidst deep nature. Spiritual seekers will find numerous spiritual sites throughout Bhutan. Some are within easy reach or a few hours walk, and others require a bit of a trek or climb, but it is always satisfying to reach the tops of the numerous monasteries that mark Bhutan”s landscape and to take a moment to contemplate on top of the world.

The tsechus, local community festivals and the sacred architecture represented by the various stupas and mani walls, are a constant reminder that in Bhutan, spirituality is still a way of life, despite a fast changing world.

So why spend your money to come here? Firstly there is the amazing Himalayan landscape, where snowcapped peaks rise above shadowy gorges cloaked in primeval forests. Taking up prime positions in this picture-book landscape are the majestic fortress-like dzongs and monasteries. This unique architecture embodies Buddhist culture and sets the scene for spectacular tsechus (dance festivals). Then there are the textiles and handicrafts, outrageous archery competitions, high-altitude trekking trails, and stunning flora and fauna. If it’s not ‘Shangri La’, it’s as close as it gets.

Bhutan’s Gift to You

When you visit Bhutan, you will become one of the few who have experienced the natural charm of the first country where Gross National Happiness is deemed more important than Gross National Product. By law, at least 60% of the country must remain forested for all future generations. You will experience Bhutan’s natural wonders first-hand when travelling the mountain passes – resplendent with rhododendron blossom in spring. Botanical riches and unique mammals and birds are protected in several national parks, and a mountain trek is one of the best ways to experience the Himalayas.

Home > Bhutan: Happiness is a Place