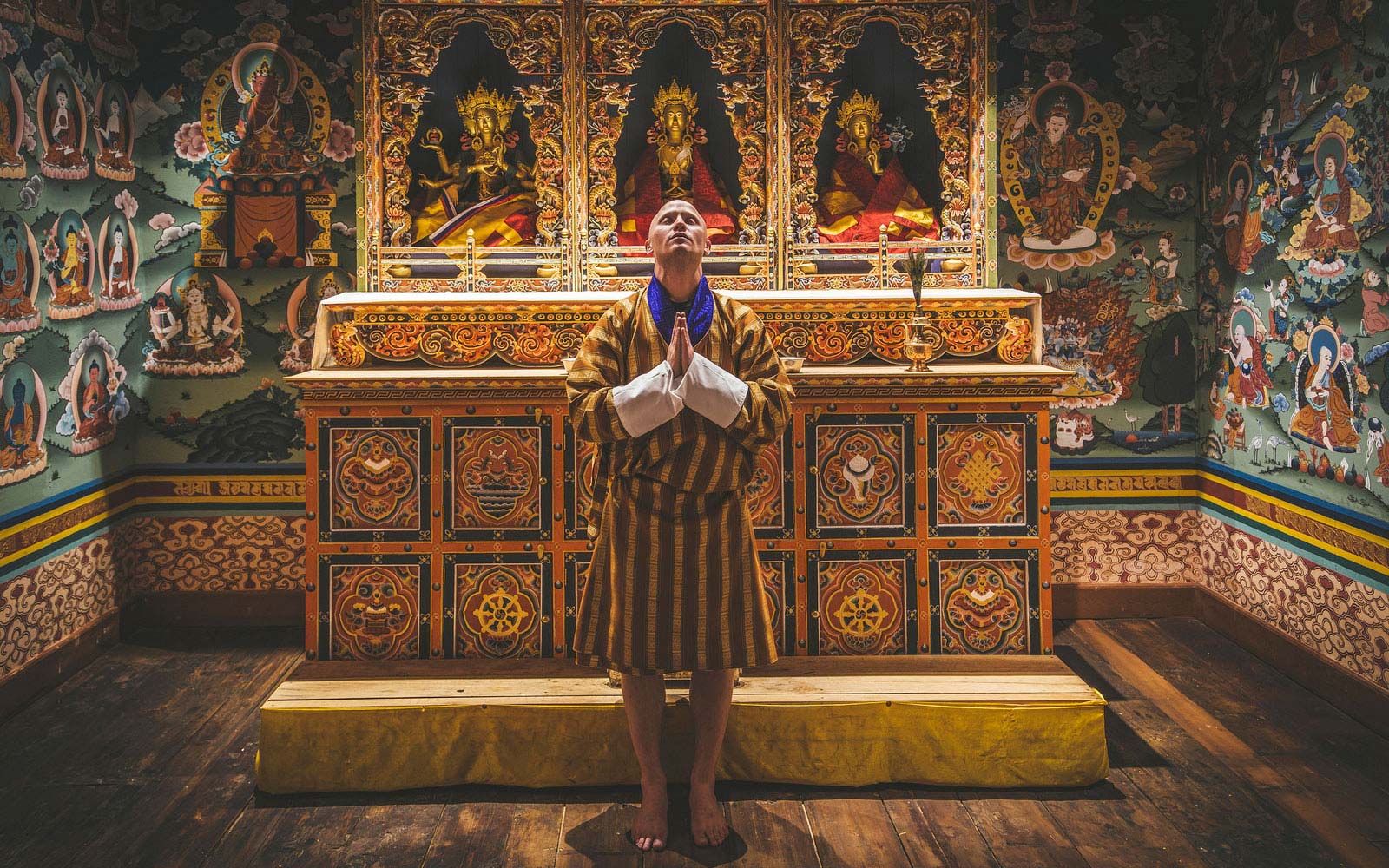 Note: Use this as a general guide to get an idea of the tour. Do keep in mind that there will be further customization on the given itinerary, depending on the season, your interests, group size and your preferred duration of the tour.

The Essential Bhutan, as suggested by the name, the trip will give you a deeper understanding of the Bhutan. The tour covers excursions and walking tours in Paro, Thimphu (Capital of Bhutan), Punakha and Phobjikha valley in Wangdue.

Welcome to Bhutan, the Land of the Thunder Dragon. Touching down at Paro International Airport, you will be greeted by your guide upon exiting the arrival hall. Today, we will take it easy to acclimatise to the altitude. Drive to Thimphu, check in to the hotel and lets have your first taste of Bhutanese cuisine and some light sight-seeing in Thimphu if possible. On the way to the viewpoint over Thimphu is the home of Bhutan’s national animal, the Takin; a strange looking beast some say looks like a bee stung moose.

Heritage Museum– Dedicated to connecting people to the Bhutanese rural past though exhibition of artefacts used in rural households. Textile Museum– Witnesses the art of traditional weaving. Thimphu Dzong– The largest Dzong, is also the seat of the office of the King of Bhutan.  National Memorial Chorten, which was built in honor of the late King Jigme Dorji Wangchuk. Paper Factory – Witnesses the art of making traditional Bhutanese paper. Simtokha Dzong – Five miles from Thimphu, on a lofty ridge, stands Semtokha Dzong the oldest fortress in the Kingdom. Centenary Farmers’ Market – Every Saturday and Sunday most of the Thimphu population congregate on the banks of the river where the weekend market is held. Here villagers from the valley and other nearby places come to sell their agriculture products.

Dochula Pass – the 108 chortens was built by the present Queen Mother of Bhutan Ashi Dorji Wangmo Wangchuck to commemorate Bhutan’s victory over Indian militants and to liberate the souls of the souls lost. Punakha Dzong – Built in 1637, the dzong continues to be the winter home for the clergy, headed by the Chief Abbott, the Je Khenpo. It is a stunning example of Bhutanese architecture, sitting at the fork of two rivers, portraying the image of a medieval city from a distance. The dzong was destroyed by fire and glacial floods over the years but has been carefully restored and is, today, a fine example of Bhutanese craftsmanship. Khamsum Yulley Namgyal Chorten – Built by the third Queen Mother Ashi Tshering Yangdon wangchuck this Chorten is a splendid example of of the Bhutanese architecture and art and is the only one of its kind in the world. It has been built over eight and a half years and its details have been drawn from religious scripture.

Chhimi Lhakhang – A 20 minutes walk across terraced fields through the village of Sopsokha from the roadside to the small temple located on a hillock in the centre of the valley below Metshina. Ngawang Chogyel built the temple in 15th century after the ’divine Madman’ Drukpa Kuenlay built a small chorten there. It is a pilgrim site for barren women. Wangdue town, one of the major towns and district capital of Western Bhutan. Located south of Punakha, Wangdue is the last town before central Bhutan. The district is famous for its fine bamboo work and its slate and stone carving. We will pause to view the Wangdue Phodrang Dzong. Built in 1638, Wangdue Dzong is dramatically perched on the spur of a hill and overlooks the confluence of the Tsang Chu and Dang Chu rivers.

The valley of Phobjikha is well known as the winter home of the Black necked crane (Grus Nigricollis). Bhutan is home to around six hundred black-necked cranes with Phobjikha being one of the popular places that the birds migrate to in the winter months from the Tibetan plateau. The elegant and shy birds can be observed from early November to end of March. Overlooking the Phobjikha valley is the Gangtey Goempa. This is an old monastery that dates back to 17th century.

Paro Valley – The beautiful valley is home to many of Bhutan’s old monasteries and temples. The country’s only Airport is in Paro. The valley is also home to mount Chomolhari (7,300 meters) situated at the northern end of the valley whose glacier water forms the Pachu flowing through the valley. The following are some of the prominent places to visit in Paro. Paro Dzong – Also known as Rinpung Dzong, this 15th century massive fortress/monastery, is also the administrative center of the dzonkhag. Ta Dzong – Built as a watch tower the Ta Dzong, it was converted into the National Museum in 1968. The museum boasts antique Thangka, textiles, weapons and armour, household objects and rich assortment of natural and historic artifacts.

Are you ready? We will be making the hike up to one of the key highlights in Bhutan today! Tiger’s Nest aka Taktsang Monastery. Taktsang Monastery – A one hour hike to the cafeteria is also a vantage view whereby you can enjoy the stunning view of the monastery. Prayer flags adorn the cliffs and this is also where Guru Padmasambhava landed on the back of a tigress in the 8th century. Kyichu Lhakhang – After a sumptuous local lunch, we will retrace our steps to visit Kyichu Lhakhang, one of the oldest temples in Bhutan.

Today we will bid fond farewell to this beautiful Himalayan country and take an early flight back home or to your next travel destination. We hope by now you would have made some friends and also kept many photos and beautiful memories of Bhutan! And we look forward to seeing you again in this beautiful land of endless Enchantments! Tashi Delek!

On top of the SDF of USD 200 per person per night, there will be additional cost to cover hotel rooms, meals, entrance fees, guide and private tour vehicle. Send us a booking inqury and we will customize a package for you – as per your budget and interests.

Get in touch with us for an obligation-free tour quote or anything related to our travel products and services.

If you have any special interest or specific needs and constraints, we are happy to discuss and offer a personalized service to suit your needs. Call us at (WhatsApp) +975 77430698 / 17110975 or email us at breathebhutan@gmail.com